Since this week’s challenge was to write about the troublemaker or the black sheep in the family, I thought I would play it safe and write about a distant cousin, a very distant cousin. The bad boy in my family tale was the son of a preacher. This farm boy fought in the Civil War, and didn’t like to curse. But this good boy gone bad loved his notoriety as an outlaw and even handed out press releases after some of his crimes. This infamous thief enjoyed the title of Robin Hood although no accounts exist of how he shared his wealth with those less fortunate. Eventually, his wicked ways did come with a price, for this outlaw, this son, this husband and father was shot in back of his head, murdered, dead at the age of thirty-four.

Throughout American history, one infamous bandit stood out among the rest. This folk hero’s criminal activity spanned for over sixteen years as he, his brother, friends and fellow outlaws robbed banks, stagecoaches, and trains across the Midwest and the South. Jesse Woodson James was a fearless bandit from Missouri. His crime spree he stated was created by the unfair treatment that he and other Southern sympathizers received from Union traditionalists and activists after the Civil War. Although he had many supports in his home state, his brutal actions intimidated many innocent people, and it created economic hardship for those living in in his home state of Missouri.

On September 5 1847, Jesse Woodson James was born to Zerelda and Robert James in Clay Country, Missouri. His parents moved from Kentucky, and Jesse’s father was a wealthy hemp farmer and a Baptist minister. Jesse had an older brother, Frank, and a younger sister, Susan. His older brother Robert died in infancy. When Jesse was three, his father left his family behind and traveled to California. He told his family that he was going to preach to the gold miners.   While in California, the preacher died in a mining camp.

On the farm, Zeralda was left alone to manage their one hundred acre farm. The southern native used slave labor to grow hemp and raise sheep. This woman was strong and hardworking and managed her farm and her children. She remarried twice, first to Benjamin Simms, and later, to Dr. Reuben Samuel in 1855.

As a child, Jesse was well liked in his community. He was a kind and religious boy who liked to sing in the church choir. He wanted to follow in his father’s footsteps and become a minister. The boy also had a talent for working with horses.

As tension mounted between the North and the South, the James family supported the Confederacy during the Civil War. In 1863, while Jesse’s older brother, Frank was fighting, a group of Union soldiers stopped at the farm while tracking information about Confederate guerrillas who were terrorizing Union supporters. During their stopover, they badly beat Jesse and hanged his stepfather from a tree. Although Reuben Samuel survived, he did suffer from a permanent brain injury after his lynching. After the attack on his family, Jesse joined his brother and fought with William “Bloody Bill” Anderson, a notorious leader of Confederate guerillas. This band of marauders was often more interested in robbery and looting than they were in the improvement of a Southern cause. 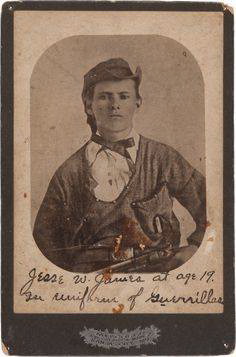 On September 27, 1864, Jesse participated in a raid in Centralia, Missouri. The guerillas, led by “Bloody Bill,” looted the town and later robbed a train. These outlaws executed twenty-two unarmed Union soldiers who were on leave. Afterwards their bodies were mutilated and scalped. This incident was called the Centralia Massacre, and hours later when Union soldiers arrived, “Bloody Bill” and his men killed and injured over one hundred soldiers in thirty-ninth Missouri Infantry.

At the end of the war, Jesse was shot as he tried to surrender. His cousin, Zeralda Mimms, tended to his wounds until he regained his strength.   Years later, the two married. Once Jesse healed, he began his crime spree. In 1866, he and his gang robbed the Clay County Savings Bank and murdered an innocent bystander. By 1869, the name of Jesse James was well known, and this bandit enjoyed the attention. He would often write letters to the editor of Kansas City Times, another Southern sympathizer. In turn, John Newman Edwards slanted his editorials and praised the efforts of this outlaw. Overtime, Jesse James became a folk hero and an icon of the Confederate insurrection during the Reconstruction years. People from his home state even demanded that the governor pardon this rebel.

On April 24, 1874, Jesse married his cousin Zeralda “Zee” Mimms who was named after Jesse’s mother. The couple had three boys and a daughter. They had a son Jesse, and twin boys, Gould and Montgomery who died just a few days after being born. They also had a daughter named Mary. For years, the family moved around in order to remain hidden from the law. Jesse used different aliases to keep lawmen at bay. For a time, Jesse’s children did not even know the true name of their father.

In 1882, Jesse moved his family to St Joseph, Missouri. He was living under another assumed name. Over the years, members of his gang were killed or imprisoned, so he sought to recruit new men to aide in his robberies, so he enlisted two new men, Robert and Charley Ford, to help with his outlaw activities. A year earlier, Governor Thomas T. Crittenden had issued a proclamation for the arrest of the James Brothers. Robert Ford discussed this reward with the governor, and on April 3, 1882, Robert Ford, shot Jesse James and killed the infamous outlaw. The outlaw died in his home in the presence of his family. A public outcry ensued, for many thought his death was an act of cowardice. The Ford brothers went to trial and were found guilty, but the governor pardoned the two men.

After Jesse’s death, his memory continued to live on through his tales and through his folklore. His childhood farm has stood as a museum and as a tribute to this outlaw. Every year in September, Kearney, Missouri has held a Jesse James Festival, and historical sites in several states dot the landscape as they claimed this infamous son as their own.   Books created narratives; movies invented a legend. And today, nearly 135 years after his death, this bandit’s life still has snatched the interest of today’s world.

4 thoughts on “The Preacher’s Son”

Tips, Tools and Stories for the Family Historian