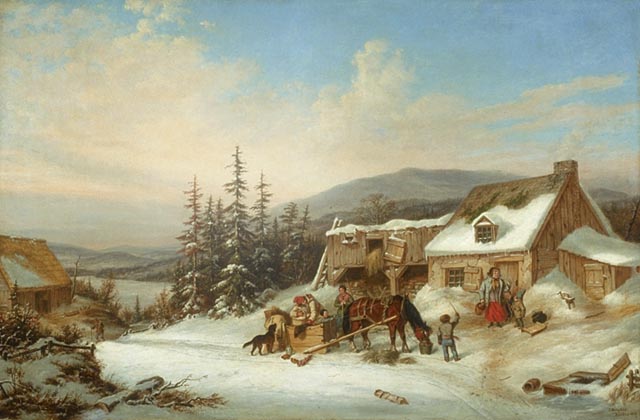 In the year 1643, Claude Damise was born to Etienne Damise and Genevieve Pioche. The family was located in the parish of Saint-Nicholas-du-Chardonnet in the faubourg Saint-Victor section of Paris, France.

After the death of her father, Claude decided to take her king’s offer and sail to the fledgling colonies in New France. If the colonies were to grow, they needed women for the soldiers and settlers that resided in these new lands. Between 1663-1673, King Louis XIV started a program that sent around 800 women to North America. He gave the woman a dowry and supplies to help them start their homes. In time, these women were called the King’s Daughters.

In 1668, at the age of 25 years, the young woman sailed to Canada to find a husband and a new home. When she arrived, she lodged at the Maison Saint-Gabriel in Montreal. On 10 Dec, she married Pierre Perthuis dit Lalime in Montreal. Claude could not sign the marriage contract, but her husband signed the paper. Her cousin, Francoise Guillin that was also a King’s Daughter, attended the wedding and was a witness to the ceremony.

Her husband was born in 1644 in the Saint-Denis district of Amboise, Touraine, in France. Pierre’s parents were Sylvain Perthuis and Matherine Rassicot, and his father was a wood merchant. In 1665, he sailed to Canada, and he became a soldier for the Salieres Company of the Carignan Regiment. In time, he also became a merchant in Montreal, and in 1695, he enlisted as a fur trader.

This grandmother also took a lover, and on the 23 Mar 1676, she had a son, Andre-Jean. His father was Jean Paradis, and he was the son of Pierre Paradis and Barbe Guyon. Since Andre’s birth was well documented, I do not know if her husband was aware of her infidelity. However, records indicate that Andre was adopted by another couple, Rene Siret dit Lafleur and Anne Fayet, another King’s Daughter. This couple was childless. They did not marry until 8 Sept 1670, so Andre was adopted when he was older.

In 1682, Claude and her husband, Pierre, were involved in a scandal. A cabaret owner, Anne Lamarque dit Folleville, was taken before the courts for her immoral lifestyle. She was accused of having several lovers. In April 1682, Anne was a lodger in the home of Claude and Pierre, and they were called in as witnesses.

The cabaret, owned by Anne and her husband, Charles Testard in Montreal, was quite a popular stop among the men from all ranks of society. Since the men often traveled for their jobs, Montreal was in a central location for these men passing through the area. It also became the hub for merchants and traders, so the cabaret was an infamous hot spot for controversial behavior.

This scandalous business attained notoriety and gained the attention of the church and the civil authorities that wanted to stop the immorality in their town. As complaints began to mount against the couple, a parish priest, Jean Fremont, became involved. He wanted the cabaret closed, for the establishment was troubling; it often included violent fights as prostitutes worked their charms, and husbands cheated on their wives.

On June 17, 1862, Jean Fremont appealed to the local authorities and requested that Anne Lamarque should be stopped, and her business closed. The long trial included many of the neighbors of Anne and her husband. Interesting and sordid details even added witchcraft, for witnesses stated that Anne had a book of spells, written in Greek, Latin, and French. Some claimed she contrived spells that lured men to her place of business. Others acknowledged that the madame of this establishment created love potions that enticed the men and ensured their loyalty to frequent her place of business. Even her husband, Charles, testified that his wife was a magician. Her customers attested to her illicit behaviors and suggested that some of her children were born from these adulterous misdeeds. The couple was accused of debauchery, which also included slights against the religious members of Montreal.

Still, Anne defied the accusations, and with her influential connections in Montreal, she was acquitted, and the cabaret remained in business. Her success was short-lived; however, four years later, in 1686, the businesswoman died at the age of thirty-seven.

After this incident, no more information about Claude was mentioned, except for the fact that she continued to have children with her husband, Pierre.

In 1705, Claude died, and on the 6 Oct, services were held at the Notre Dame Basilica; she was buried in the churchyard.

Her husband, Pierre, remarried. His new wife, Francoise Moisan, was another King’s Daughter, and she was also my 10x great grandmother.

6 thoughts on “Claude Damise: A Fille du Roi in Montreal”