In honor of Sibling Day, I decided to write about growing up with my four brothers, Tommy, David, Keith, and Danny.  As kids, we had a pretty great childhood.  We lived in an old Victorian House in Alameda, California.  It needed work, but it was the perfect place for a large family.

As kids, we had so much freedom to explore the island and the local beach and park area.  We were always riding our bikes and going somewhere to play.  One favorite place we liked to visit was Washington Park.  It was a large park with many trees and great places to play.  They had the usual ball park and places to shoot hoops.  There was also a great train engine, and we used to spend hours playing on it.  Sometimes we played tag; other times we were “exploring” the country.

Most days we wandered down to the beach too.  We explored the marshes and ponds while searching for tadpoles and frogs.  We also spent countless hours exploring the beach.  When we were little, mom would often pack a picnic lunch, and we would spend afternoons on the beach while playing along the shoreline.  To this day, I miss those spectacular sunsets on the San Francisco Bay.

We had a great neighborhood too with many families that had children all close to our own age.  We played so many games of tag and hide-and-seek.  We made forts and clubhouses.  We played in the sprinklers and had neighborhood plays.  We roller skated and skinned our knees.  Little brothers rode on the back of my bike as we rode around the island and went to nearby parks to play and to make crafts.

And we had our grandparents close.  That was the icing on the cake to have them so near to us; it was a blessing to have holidays and time spent with them.  How I miss those days with mom and dad, grandma and grandpa, and all those wild, crazy boys!  Life was good. 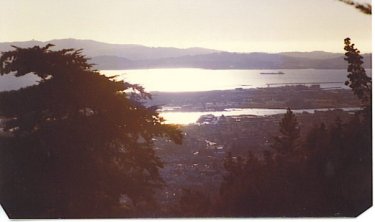 Tips, Tools and Stories for the Family Historian