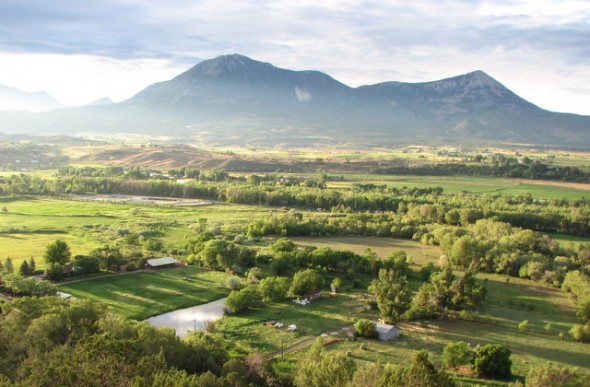 I had butterflies and couldn’t sleep, so I finally rolled out of bed about 4:30 this morning and hopped in the shower.   Today, I was returning “home” to Hotchkiss, Colorado to attend a family reunion, and I hadn’t been there since my grandmother’s funeral in 1983. Too many years had passed since I had visited my early home.

As the time loomed closer for me to leave, I felt like a nervous child, and I told my daughter that I didn’t want to go! Who could blame me? Most of the people at the reunion, I barely knew, and those I did know, I hadn’t seen for years. Wishing my daughter could “hold my hand,” and be my plus one was not an option this year since I decided to attend at the last minute, and she had last minute home schooling records to complete in order to meet her own deadlines. My daughter’s smile chased away my fears, and she gently reminded that I would later regret it if I didn’t visit this year. While I finished dressing, she packed my breakfast and laughed at my jitters, especially when I asked her if she felt like she were getting an excited child ready for summer camp who had last minute fears and just wanted to stay at home. She walked me to my car and hugged away my concerns before I headed off to the reunion.

Although my drive across the state took about four hours, the time flew by quickly, and I enjoyed driving over Vail Pass on I-70 and McClure Pass on Colorado State Highway 133. As I approached Carbondale, my excitement grew. When I came to Paonia, I stopped and grabbed some water and decided to walk around town and stretch my legs. Now, I was only about ten miles from Hotchkiss.

The people of Paonia were friendly and the town was charming with its main street. Historic buildings graced the town’s quaint business district. The tiny town was settled in 1880 in the scenic North Fork Valley and has rested at the base of Mount Lamborn and the Grand Mesa. With a population of less than 1500, Paonia continued its agricultural roots with its many orchards that produce its famous peaches, nectarines, cherries, apples, plums and pears. Some vineyards have popped up in the area too, and families have sustained Paonia’s long history with farming and ranching. Once again, I wished I had planned my get-away because I would have loved to spend a long weekend in this area. In fact, it would be one of my top two places to retire too; I have even found the perfect little cottage, if only…sigh.

After I left Paonia, Hotchkiss was just a few miles down the road. As I drove along the highway, the heart-warming, friendliest town sign greeted me as I entered this old town. I noticed the Delta County Fairgrounds to right with its rocked arches. This was the place the reunion would take place, but it was still early, so I went exploring. I passed the Taco Hut that was supposed to be my old home in the early ‘60s although some of the pictures that I have do not look like the surrounding area, a bit of a mystery. I stopped across the street and phoned my daughter.   Like a relieved child who adored camp, I told my daughter that I was super excited about my little road trip and that I was currently sitting across the street from my old home, and she laughed, for she was happy that I was enjoying my little jaunt. Once I ended my call, I took snapshots of my former home and explored the area.

Blue skies with puffy clouds hung high overhead, and brick buildings and little shops lined Bridge Street. At one of end of this street, Mount Lamborn grandly loomed over the little town. Even smaller than Paonia, the population in Hotchkiss has remained just under 1,000 residents. And ranchers and farmers still reside in the area, and I am proud to say that the Allen Family still holds property as one of the local families. My cousins, Ross and Beth Allen, own the property that once belonged to my grandparents, Tom and Elva Allen.

Before I headed to the reunion, I wanted to visit the Riverside Cemetery, where so many of my family members have been buried. When I arrived, I began looking around and quickly spotted the graves of family members. First, I discovered the grave site of my great-grandparents, Henry and Anna (Payton) Allen who came to Hotchkiss in a covered wagon in 1886. The next family member I found was my Uncle Lyle Allen. He lived in my childhood home of Alameda, California too, so I was close to my uncle; he died in 1981, and I have missed that man.  Finally,  I found my great great grandmother Sarah Hupp Allen.  According to family lore, she could not be buried next to her husband, David Allen, since he was buried on the upper level on the mesa in the old cemetery.  When she died in October of 1915, the ground was too frozen, so she was buried on the lower level.  David and Sarah Allen also traveled to Hotchkiss by covered wagon in 1886. 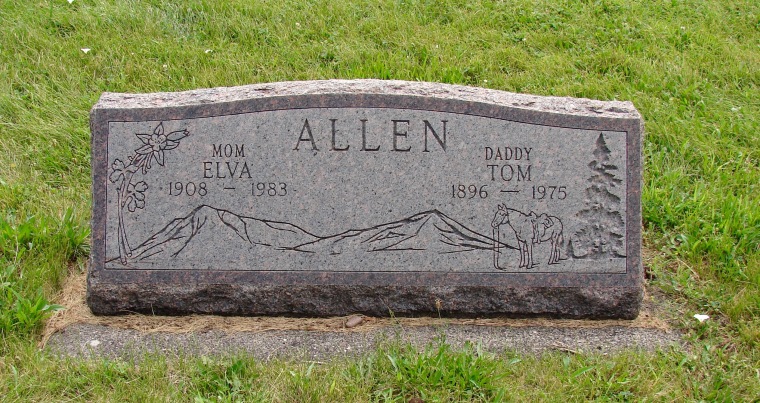 As I gazed at my grandparent’s stone, I was once again thrilled at its beauty and significance.   Their daughters put all the things that my grand parents loved about Colorado on this stone, for it held the beauty of mountains, the pines, and the columbine flowers that my grandmother so loved.  It also had a horseless rider that was saddled as if he were waiting for his rider to return; when my grandfather was young, he was a horse trader and would often break and train horses.  Their tombstone was so pretty. As much as they loved this state, I was thankful that they followed our families to California, for they were such an important part of my life.

While I was at the cemetery, I phoned my cousin, Richard Allen to let him know I had arrived, and he informed me he was just a few minutes away. Looking across the area, the beauty of the mountains and cemetery tugged at my heart. This place was so peaceful. As much as I wanted to go explore the older cemetery that was higher up the side of the mesa, I decided against it. My time in Hotchkiss was short, for I planned on returning to my daughter’s home that evening. The road also looked rough, and I didn’t want to take the chance of driving my car over the rough terrain. Normally, I would have hiked up to the old part of the cemetery, but with all the rain the area recently had, it was hot and muggy, and very uncomfortable. I decided I needed to return in the fall when it was cooler and the many aspens in the area started to change to golden hues of amber, yellow, and orange. I would plan a long weekend.

As I looked around the cemetery, another family was holding graveside services.  Richard pulled into the cemetery, and we greeted each other with a hug. Immediately, he saw his dad’s grave and slowly walked to it. On his father’s tombstone was a picture of the smiling man in his uniform. His son was built like his father, tall and rugged. And when the handsome son smiled, the resemblance was uncanny, for he looked so much like my Uncle Lyle.

Soon the other members of the graveside service began to disperse, and some stopped since they knew we were exploring the Allen grave sites. Our cousin, Wilson Allen, and his family stopped and introduced themselves. We discovered that they were burying his sister Bobbi Allen. She had passed in May of this year, and they decided to wait until the reunion to bury her ashes.

As they left, I followed, for I was ready to find some water and cool shelter. The humidity had withered my curled locks as my hair remained flattened around my shoulders, and my jeans clung against my legs. All I wanted to do was cool off somewhere. After grabbing a cold bottle of water, I headed to the fairgrounds. It was time to get reacquainted with my extended family.

Both Fictional and Non