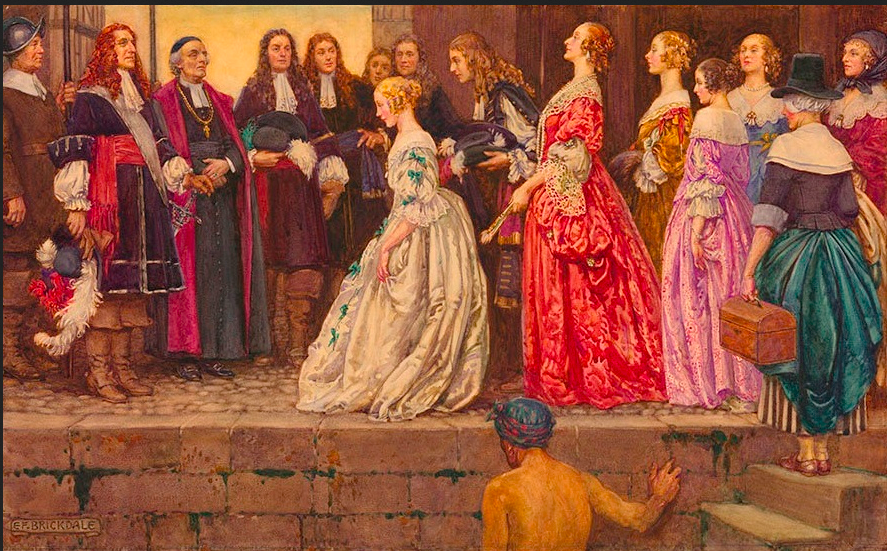 “My daughter, Jeanne, also sailed to New France almost two years ago. Although she sent word through the nuns in Ville-Maria that she was fine, I do not hear from her. She does not know how to write.”

On the day before she was to leave her home, Madeleine slowly strolled through her neighborhood and the market of Les Halles. Merchants called out as they tried to sell their vegetables and fish to those that walked through the narrow corridor of the open market. Although she needed to save her coins, the young woman stopped by a crafter’s stall to examine the artisan’s creations. The artiste had carved tiny woodland creatures from the trees of the nearby forest. One small fawn and her mother caught her eye. She wanted to buy the gift for her mother, a departing remembrance and the last present she would ever give her before leaving her home country and traveling to New France.

Seeing the tears form in her eyes, the older man questioned, “Why does the lovely mademoiselle look so sad on this beautiful morning?”

Smiling at his kind words, she replied, “Today is my last day at home in Paris. Tomorrow I set sail to New France. Your carving reminded me of how much I will miss my mother. How much?”

“Ah,” the older man softly replied as he turned to look towards the throngs of people along the avenue. When he turned and glanced into her eyes, she could see his tears too. “I am afraid this one is not for sale, but I will make this a gift to you, on one condition.”

Picking up a carving of a small rabbit, he carefully inspected his work. “My daughter, Jeanne, also sailed to New France almost two years ago. Although she sent word through the nuns in Ville-Maria that she was fine, I do not hear from her. She does not know how to write. She loved rabbits and would make pets of the babies when she was a child.” He chuckled at the memory. “I know you may never see my child, but if you do, would you give this to her?”

“Of course,” Madeleine replied. “I am afraid; however, trying to find her would be difficult, but I would be honored to look for your daughter. If I find her, I can write to you. And I would still like to pay for the deer.”

“No, no.” the old man protested, “It is my gift to you, and you will make me happy knowing that perhaps you will one day meet my girl.”

Reaching across the rough table, Madeleine embraced the older man and promised to deliver the rabbit if she crossed paths with his daughter. She memorized her name, Jeanne Collet, and the name of Jeanne’s husband, Grégoire Simon. The couple married in Ville-Maria in 1668, and she promised the father she would save the information and take it with her to New France.

The kind man kissed the rabbit before he wrapped it a rag, he used for cleaning his carvings and then gently handed it to the woman along with the statuette she admired. Although she started to protest, he gently scolded, “You will make an old man happy by accepting this gift.”

She nodded slowly and thanked him for his generosity. After her meeting with Monsieur Collet, the woman needed to gather her thoughts and her emotions before she headed home. She decided to take solace at Saint-Eustache. It would be encouraging, for her parish church always provided comfort when she needed to clear her thoughts.

Looking towards the magnificent church, Madeleine began to doubt her new venture. How could she leave mama and poppa? They had discussed the need for her departure. They could not support their daughter, and without a dowry, their daughter had limited opportunities to wed, especially now that she had just turned twenty-four. With the King’s invitation, she would sail to a new world with a fair dowry and marry a stranger in a far away land. What choice did she have? Her options were limited.

Walking towards her church, she muttered, “Maybe I should just become a nun.” At that thought, she laughed. With her stubborn ways, she knew she would never be successful as a bride of Christ. Once again, she found herself aggravated at the plight of women and their dependence upon men. “If I am to marry, why must I leave my family, my country?” She whispered before entering the church.

Looking around this architectural wonder, Madeleine sighed and wiped away her tears, so she could take in all of its glory one final time. Many memorable moments transpired in this church, baptisms, weddings, funerals. She wept that she would never marry in this sanctuary or have her children blessed within these walls, but mainly Madeleine cried for those that she would leave behind, knowing she would never see her loved ones again.

This short story was based on the life of my 9x great grandmother Madeleine Chrétien. She was born to Anselme Chrétien and Anne Bernard about 1646 in the parish of Sainte-Eustache in Paris.

Madeleine arrived in her new home as a King’s Daughter as the women were to be called. In order to populate his new lands, the king requested that young women from France should sail to the new colonies to wed the soldiers and settlers. He provided supplies and provided a dowry. My grandmother answered his call and arrived in Canada in 1670 and stayed at the Maison Saint Gabriel until she married Pierre Chicoine on October 20, 1670, in Ville-Maria (Montreal). While Madeleine could sign the marriage contract, her husband could not sign his name.

The real Jeanne Collet in this story was also a fille du roi that was born about 1645 in Orléans. She was the daughter of Michel Collet and Marie Hernault. She left her home in 1668 at the age of twenty-three, and she was an orphan.

She married Grégoire Simon in the Ville-Maria (Montreal) on December 31, 1668. The couple could not sign their marriage contract. Grégoire was a soldier, for he enlisted in the 11th squadron of the Sainte Famille militia. The coupled settled at Pointe-aux-Trembles. They never had children. Grégoire and Jeanne were killed on May 8, 1691, in an Iroquois attack.