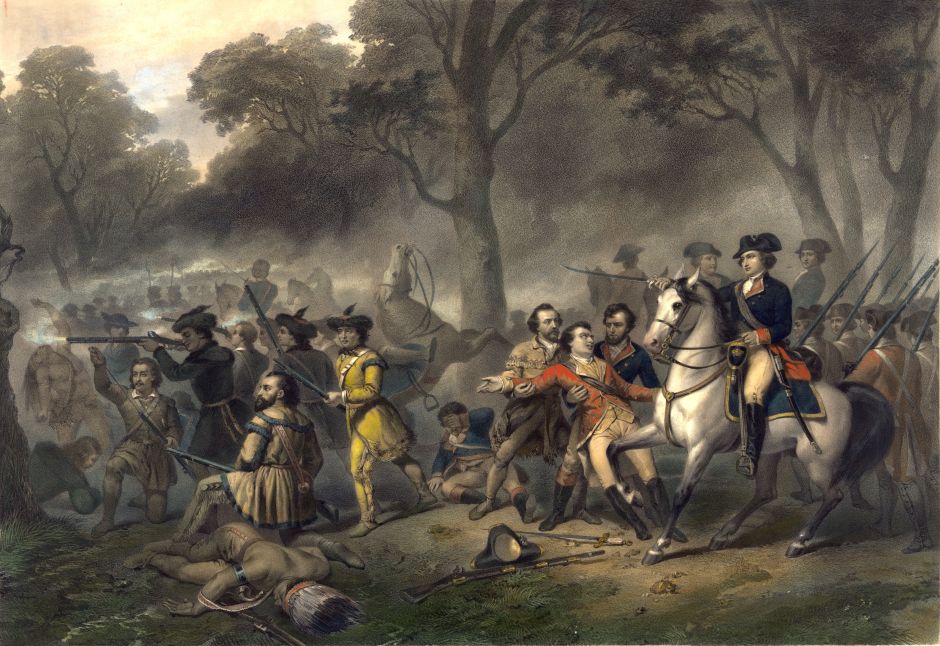 On July 9, 1755, in the Ohio Valley, the British soldiers marched towards Fort Duquesne, near the Monongahela River. During the French and Indian War, the British and the French struggled to gain control of the North American lands, and the British Army under the command of General Edward Braddock wanted to expel the French from the fort and the Ohio lands.

Monsieur Langlade, Monsieur de Beaujeu, and Monsieur Dumas commanded the French and Indian forces. The French troops maintained a force of 300 – 600, the Ottawas, Miamis, Hurons, Delawares, Shawnees and Iroquois, and about 30 French colonial troops. The British, on the other hand, retained about 1,500 men.

After their general was wounded, Lieutenant Colonel Thomas Gage took command. While Washington still suffered from his illness, he took charge and formed a rear guard. During the battle, he had two horses shot out from under him, and his coat and hat contained several bullet holes. Washington conquered death on the battlefield that day, and he later wrote a letter to his brother John. He shared, “by the All-powerful dispensations of providence, I have been protected beyond all human probability or expectation; for I had four bullets through my coat, and two horses shot under me; yet escaped unhurt, although death was leveling my companions on every side of me!”

Sixteen years later, Washington, and his physician, Dr. James Craik, encountered Chief Red Hawk, one of the native men that he faced in battle. Through an interpreter, George Washington discovered the chief was a very great man among the northwestern tribes, and he was the same man that commanded the Indians during the Battle of Monongahela. Orders were given to shoot George Washington, but the bullets did not hit their intended target. The Indians believed a great spirit was protecting him and ceased fire. Chief Red Hawk claimed that he shot at Washington eleven times but missed. The native leader affirmed that George Washington would one day become the chief of nations, and a people yet unborn would hail him as the father of a mighty empire.

A Man of Character