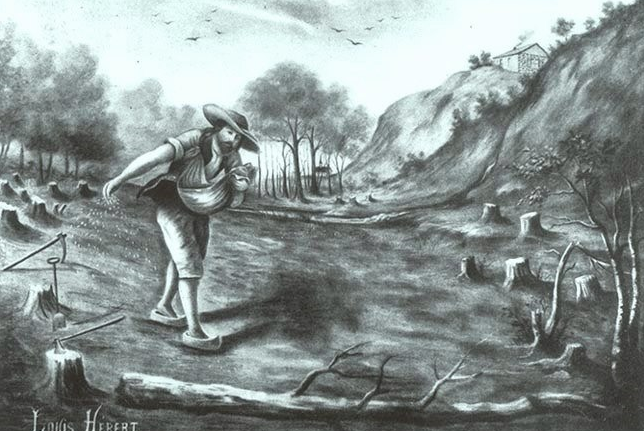 In 1604, longing for adventure and wanting to escape the confines of Paris and explore new lands, Louis Gaston Hebert sailed to the unrivaled beauty of what was once known as New France. Enamored with the rugged magnificence of this continent, this man continued in his quests to view more of this world until he finally settled with his family in the Quebec Colony. Over the centuries, historical accounts recognized Hebert as one of the first settlers of this country.

This grandfather was born about 1575 in the home of his family, the Mortier D’ Or (the House of Gold) on the rue Saint-Honore in Paris, Seine, France. The infant’s mother was Jacqueline Pajot; she died when her son was about five years old. His father was Nicholas Hebert, a distinguished apothecary in Paris that also served the Royal Court of the Queen, Catherine de Medici.

Following in the steps of his father, Hebert studied medicine and science, and he was also a pharmacist. Throughout his life, he relished in learning about plants and enjoyed gardening. By the early seventeenth century, while living in Paris, this man practiced his art as an apothecary and a spice merchant. In 1603, he received the title of a master apothecary, and he owned a shop and a home in St-Germain-des-Pres, near the banks of the Seine.

Through his family, Hebert learned about the exciting, new opportunities that awaited in New France. His cousin, Pierre Dugua de Mon, left France behind to lead an expedition in this new world. In 1606, Hebert followed as he began his first of three journeys to New France. His cousin became the lieutenant-general of New France and longed to create a settlement in Acadia. Dugua de Mons hired Hebert to work in Port Royal (Annapolis Royal) in Nova Scotia. During this time, Hebert met Samuel de Champlain, the man known as “the Father of New France.”

During his time in Port Royal, Hebert was well known and respected for his agriculture methods and farming experiments. While in these new lands, Hebert also cared for the other settlers that worked in this settlement. A native tribe, the Micmac taught him about important indigenous plants, and the scientist cultivated these plants and added them to his growing gardens. Unfortunately, in 1607, the trade agreement contracted to Dugua de Mons was rescinded, and he lost the backing of the king. Settlers deserted the outpost, so Hebert returned to Paris.

In 1610, Hebert returned to Port Royal with his Uncle Jean de Biencourt de Poutrincourt, a French nobleman that was a commander that strived to colonize the lands in Acadia. Once again, Hebert tended the land and the people, including the natives that lived in the area. This time the settlement flourished until the colony was destroyed by the British in 1613. Hebert and his companions were forced to return to Paris.

Since Champlain recognized Hebert’s talents in Acadia, he asked this man to join him in a new venture, establishing a new settlement near the St. Lawrence River. Champlain asked Hebert to bring his family and live in the colony for at least three years. He promised Hebert annual salary of 600 livres; also, he would receive land.

Ready to start a new life with his family in a new land, Hebert sold his practice and his property. However, the Canada Company did not keep their word and refused to allow Hebert and his family to board the ship, Le Saint-Etienne, until he signed a new contract which cut his salary in half. Furthermore, it demanded that Hebert serve as a doctor and a surgeon, farm the ten acres of land, and allow the company to have exclusive rights to purchase his produce at a reduced price. Since he had sold all that he owned, Hebert half-heartedly accepted and signed the new contract.

The family set sail from the port of Honfleur, France on April 11, 1617, and arrived at the Quebec settlement on July 15, 1617. Hebert and his family were the first European family to settle in the Quebec Colony, and soon, others followed and also relocated to make these new lands their home. The year the family arrived, Hebert was the first man to obtain a land grant from the French regime.

Once he arrived, Hebert hand-picked ten acres which now sits in the heart of Quebec, located on the property of the Seminary of Quebec and the Basilica of Notre Dame. Immediately, he started clearing the forest so that he could plant his crops. This work angered the fur traders, and the company would not let him import a plow from his homeland. Still, he and his family broke ground with only hand tools and raised corn, winter wheat, peas, and beans. To the growing farm, they added cattle, chickens, and pigs. In time the farm included an apple orchard from trees imported from Normandy, and a vineyard.

The determined man’s hard work and dedication became evident in the colony. His medical services, his farming accomplishments, and his relationship with the indigenous people of the area helped the settlement thrive and flourish. By 1620, he was appointed Procurator to the King. This title gave him the power to intercede on matters in the name of the King.

By 1626, Hebert became the first Canadian Lord, for his land was classified as feudal land, and his estate was known as the “fief du Sault-au-Matelot.” Just a short time later, France gifted another parcel of land called Lespinay, located near the Saint Charles River and the Convent of the Recollects.

Sadly, Hebert would not enjoy his new lands or titles for long. On January 25, 1627, Louis Gaston Hebert died from a fall after slipping on ice and was laid to rest in the Cemetery of the Recollects. Later, in 1678, his remains were transported to a vault of the Recollects. This hardworking individual lived through many heartaches and hardships, yet remained faithful to his purpose and ambitions.

His daughter Anne married Etienne Jonquest in 1618 by Father Joseph Le Caron. She died in 1619 while giving birth to her son. Her child did not survive. Son after, her husband died, sometime between 1619 and 1620.

His son, Guillaume, married Helene Desportes on October 1, 1634. They had two children. Guillaume died on September 23, 1639, in Quebec.

The Quebec City’s Societe Saint-Jean-Baptiste erected a monument in front of city hall in 1918 to honor the pioneering family. In 1977, the memorial was relocated to its new setting, and the land it now sits on once belonged to Louis Hebert.

The sculpture depicts Louis Hebert on top of the monument with a sickle in his hand while raising a handful of wheat to the sky. On one side of the memorial, his wife Marie is seated while surrounded by her children: Anne (1602-1619), Marie-Guillemette (1608-1684), and Guillaume (1414-1639). On the opposite side, the couple’s son-in-law, Guillaume Couillard leans against a plow. Behind the marker, a bronze plaque honors the 47 couples that first settled in Quebec.

The First Colonists of Quebec