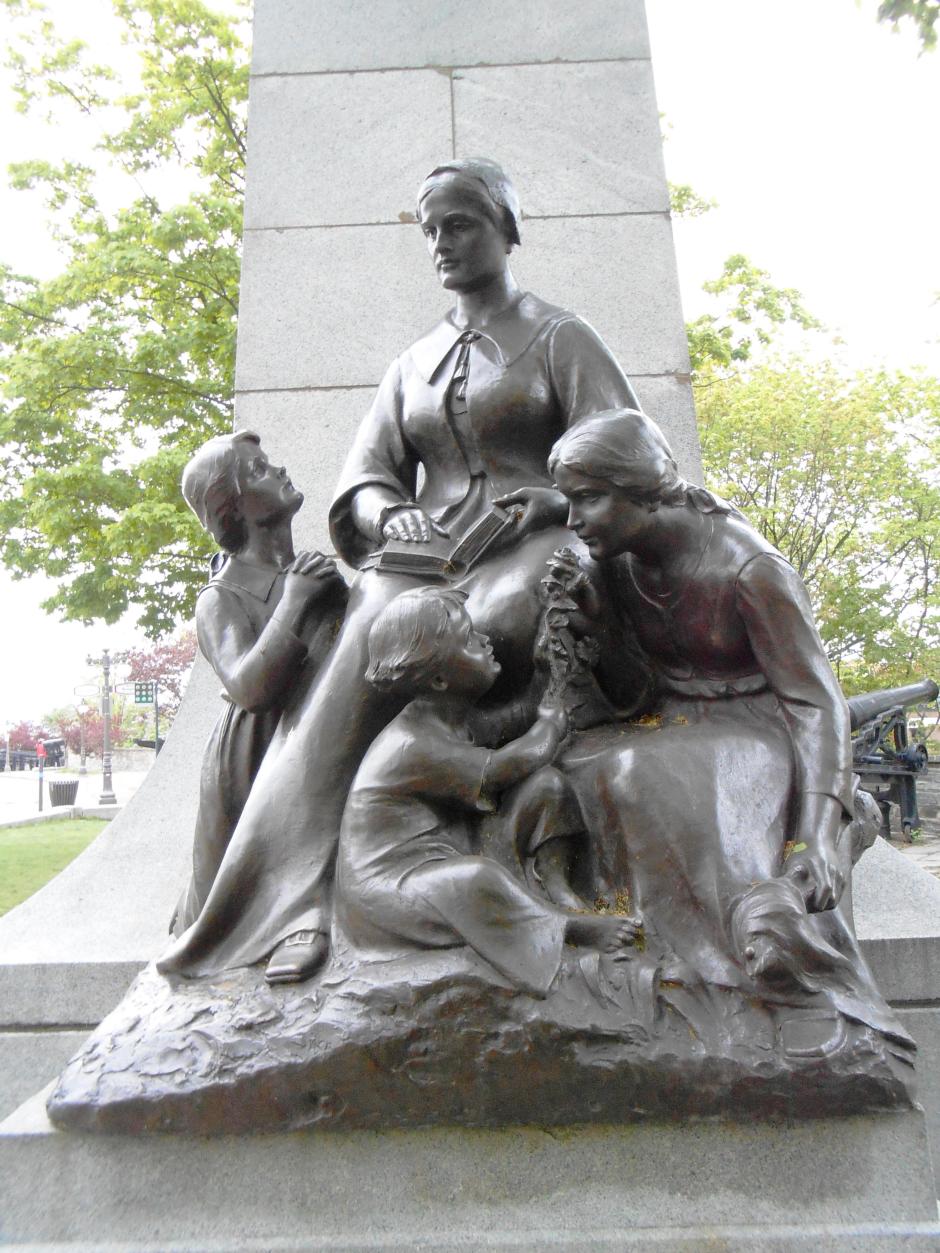 Courageous and steadfast, Marie Rollet journeyed to New France with her husband and her children. This lady was the first Frenchwoman to settle in these lands, and with determination and a brave spirit, she overcame many challenges and obstacles to make this vast wilderness her home.

She was born about 1577, to Jean Rollet and Anne Cogu. Her family lived in the Saint-Germain-des-Pres neighborhood, and her father worked as a gunner for King Henry IV. Although it was rare for women at this time, she was educated by the nuns at a local convent and received a comprehensive education.

In 1606, Marie’s husband, an apothecary, decided to travel to Acadia, in New France. He signed a one year contract with Pierre Dugua de Mons. Before he left, he gave his wife power to run his business and manage the family’s assets during his absence. During this time, she sold the family home to Queen Margaret, Duchess of Valois. The queen wanted to increase the size of her manor along the Rue de La Petite Seine. This lucrative sell provided the family with ample financial security.

After two trips to New France, Louis decided to make this country his home. On March 11, 1617, Louis, Marie, Marie’s brother Claude, and their three children sailed from Honfleur to New France. In time the family built a home on Cape Diamond in Quebec.

Upon her arrival, Marie toiled alongside her husband and helped care for the sick and tend to their farm. She was also interested in the indigenous people of the area and worked to improve the relationship between the native people and the settlers.

This kind woman taught her children how to read and write, and Marie also taught the native children too. Over the years, she taught the children about her Christian faith. Marie became the godmother for many indigenous children.

In 1618, her daughter Anne married Etienne Jonquest, but a year after the marriage, Anne died during childbirth, along with her son. Her husband also died sometime between 1619 and 1620.

On October 1, 1634, her son, Guillaume married Helene Desportes, and they had two children. Less than five years after his marriage, Guillaume died on September 23, 1639, in Quebec.

In 1627, her husband died after a fall on the ice. He was buried on January 25, 1627. After his death, she took on the responsibility of managing the land along with her son-in-law, Guillaume Couillard and her daughter, Guillemette, for she inherited part of the land.

During the English invasion in 1628, General David Kirke and his men took control of the area in the name of King Charles I. They destroyed the French supply ship and the colony’s provisions. The Recollets and Marie Rollet and her family shared their crops with those that had nothing to eat. In September 1629, Samuel de Champlain surrendered to the British and returned to France with most of the colonists. During the occupation, only about twenty French pioneers remained, along with 100 English soldiers. For three years the small colony was alone and at the mercy of the British.

The family kept busy during the occupation. Marie and her daughter, Guillemette took care of Samuel de Champlain’s adoptive indigenous daughters, Experance and Charite. Marie also cared for a young slave, Olivier, that arrived in Quebec with the Kirke brothers after he was given to her son-in-law, Guillaume Couillard. During the occupation on May 27, 1649, Marie remarried Guillaume Hubou in Quebec.

In 1632, the Treaty of Saint-Germain brokered peace between the two countries, and the Kike brothers left the colony. Quebec once again belonged to France. As settlers returned to the area, they often sought the help of Marie Rollet and her family. She continued with her work of educating the indigenous children and opened her home to become a boarding house for the children. As new settlers continued to arrive, she also taught them how to live off the land. This remarkable woman was selfless and kind as she helped settle the lands of Quebec.