Throughout their lives, Levi and Catharine Coffin helped thousands of slaves find their way to freedom. This Quaker couple opened their homes and their hearts while defying government mandates and relying on the truths of a heavenly Father to guide them while helping those in need.

On October 28, 1824, Levi Coffin married Catharine White. Their families were Quakers and abolitionists who opposed the institution of slavery. About two years after the couple wed, they followed other family members who left North Carolina and moved to the free state of Indiana. The family settled in Newport, which is now called Fountain City. Over the years, the couple added seven children to their family and still risked their peaceful life by helping slaves find freedom. During their years in Newport, the couple opened a general store, and in time, they refused to buy or sell goods that came from slave labor and encouraged others to follow this path too.

In the winter of 1826, the Coffins discovered that a large settlement of free blacks lived nearby. Since fugitives slaves were often recaptured because the area was well know to slave catchers, Levi and Catharine went to this community to let them know that they would hide slaves in their home. The couple offered transportation, shelter, food, and clothing for the runaway slaves who longed to find freedom in the North.

To aide runaway slaves was dangerous and illegal. Those caught harboring a run away slave faced harsh penalties that would include steep fines and even imprisonment. Often, they were targets, and friends would warn them about southern sympathizers and slave catchers who meant to do them harm. When questioned why they would risk their lives, Levi Coffin responded, “I thought it was always safe to do right. The Bible, in bidding us to feed the hungry and clothe the naked, said nothing about color, and I should try to follow out the teachings of that good book” (Reminiscences.) 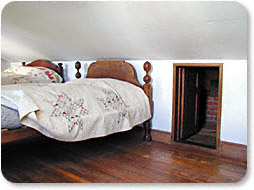 In their Newport home, the Coffins had a small upstairs room where slaves could be hidden. It had a small door that could be hidden when a bed was placed in front of the door. The home also incorporated an indoor well, so no one would notice if the occupants used an unusual amount of water. Although the house contained hidden details, Levi did not keep his work quiet, for he often stated that his home was the Grand Central Station for the Underground Railroad. Because of his work and his outspoken beliefs, he was given the title of President of the Underground Railroad.

“I thought it was always safe to do right. The Bible, in bidding us to feed the hungry and clothe the naked, said nothing about color, and I should try to follow out the teachings of that good book”

In the 1840s, because of the dangers, some Quaker leaders stated that their followers should not harbor nor help runaway slaves, nor did they want members involved with the abolitionist movement. They believed freedom had to come through legal emancipation.   A year later, the Coffins were banished from their meetinghouse because they refused to stop providing aide to runaway slaves. The Coffins and other supporters started the Antislavery Friends. 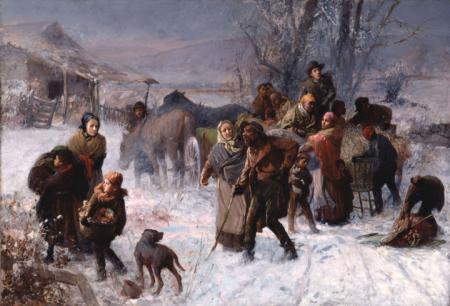 In 1847, they moved to Cincinnati and operated a warehouse that supplied only household items that were produced from free labor and not slave labor. The Coffins rented out their store and their Newport home continued to operate as a stop for the Underground Railroad.

While living in Cincinnati, the couple eventually found a large home with rooms that could be rented to boarders. With frequent quests, the home was a perfect cover to their covert operations, for it was easy to conceal their secretive guests. With Catharine’s sewing skills, she created outfits and costumes, and often the former slaves worked in their homes and blended in with the workers that helped operate the boarding home. After he escaped from the South, one former slave, William Bush, walked all the way to Coffin’s home. He stayed, worked as a conductor, and helped others find their way to freedom.

While living in Cincinnati, the Coffins helped a young slave mother named Eliza Harris. One winter, this woman crossed the Ohio River while it was frozen; she did not have shoes and she cradled her baby in her arms. Once she arrived at the Coffin home, she was weak, and she almost died from her overwhelming travels. The Coffins cared for her and her child and made her rest before she traveled again.

Harriet Beecher Stowe lived in the area and knew the Coffin family and was aware of their activities. When she heard Eliza’s story, she recapped the event in her book Uncle Tom’s Cabin. She also based her Indiana abolitionists, Simeon and Rachel Halliday, after Levi and Catharine Coffin.In 1854, the couple helped others in establishing an African American orphanage in Cincinnati. During the war, Levi pushed the American government to institute the Freedmen’s Bureau. The couple also helped former slaves acquire educational opportunities and they also assisted in helping them create and form their own businesses.

Once the Civil War started, they began helping freed slaves in refugee camps, and they spent their days caring for the wounded at a military hospital. During the war and after the war, the couple continued to work to help freed blacks. In response to the great need, Levi was a leading member of the Western Freedmen’s Aid Society, and helped raise over $100,000 in aide money while lecturing in Paris. 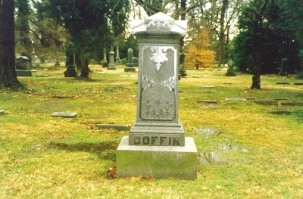 This amazing couple devoted their lives to the service of others. After a lifetime of advocacy, Levi died on September 16, 1877 in Avondale, Ohio, and he was buried in Spring Grove Cemetery in Cincinnati. Catherine died on May 25, 1881 and was buried in Cumminsville. Later, she was reinterred with Levi at Spring Grove. Although Quakers did not mark their graves, special permission was obtained to honor the couple.  On July 11, 1902, a group of African Americans from Cincinnati erected a six foot monument over the Coffins’ graves to honor them for their selfless service in helping others.  It reads:

A tribute from the

3 thoughts on “The Road to Freedom ~ Abolitionists: Levi and Catharine Coffin”