Who wouldn’t love a grandfather that chased pirates, battled ship-stealing marauders, and avenged the lives of friends and neighbors? 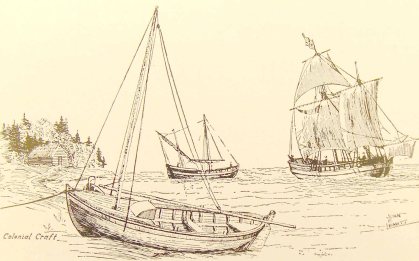 Who wouldn’t love a grandfather that loved the sea? Who wouldn’t love a grandfather that chased pirates, battled ship-stealing marauders, and avenged the lives of friends and neighbors?   My 12x great grandfather was an adventurous man who sailed to a new land and cultivated a corner of this world and called it his own. On March 20, 1630, John Gallup left Plymouth, England on the John and Mary, and ten weeks later he arrived in the Massachusetts Bay Colony. After he arrived, he set his sights on the lands around the Boston Harbor, and there he made his home.

On May 30, 1630, this grandfather arrived on Nantasket, which was later named Hull. He settled for a time in Dorchester, but soon found his way to Boston where he was given land and wharf rights. His place was known as Gallup’s Point. He also owned Gallup’s Island, and on this land he farmed. On another strip of land known as Nix’s Mate, he pastured his sheep. He also obtained a ship and was involved in coastal trade, and he served as a guide for ships entering Boston Harbor. John Gallup made a name for himself since he was instrumental in helping the colonists since they were able to purchase food and supplies and communicate with others in this new world. He even found safer channels for ships to navigate that took them away from the rocky shoals and islands that dotted the Boston Harbor.

In the fall of 1633, the colonies found themselves at odds with a trader turned pirate by the name of Dixy Bull. This pirate and his men plundered the coast of Maine and created fear among the settlers. In December of that same year, Governor Winthrop sent Gallup and twenty men to find and capture Bull and his men; however, rough winds and a stormy blizzard prevented Gallup and his men from venturing after this band of pirates. Still, when the pirates heard the news of men seeking them out to end their pillage, the men left the area and sailed south to Virginia to find new victims to prey upon. Here, it was said that he was eventually captured.

After my grandfather’s attempt to capture Bull Dixy, he returned to Boston on January 2, 1633. This man sincerely missed his family and contemplated returning to England. Since the Governor did not want to lose such an esteemed person, he decided to take this matter into his own hands. In July of 1632, he sent a letter to the Reverend John White in England. His simple request was to call on Gallup’s wife, Christobel, and convince her to move to the colonies and reunite the family. In his letter, the governor penned:

I have much difficultye to keep John Gallop here by reason of his wife will not come. I marvayle at the woman’s weaknesse. I pray pursuade her and further her coming by all means. If she will come, let her have the remainder of his wages; if not, let it be bestowed to bring over his children, if so he desires. It would be about 40 pounds losse to him to come for her.

Your assured in the Lord’s worke,
Massachusetts, July 4, 1632
J. Winthrop

The mediation worked, for the family sailed for colonies on the Griffin and arrived on September 4, 1633. Husband and father welcomed his family, for he was the one who piloted the ship into the harbor through the very channel that he discovered.

During the summer month of July in 1636, Gallup along with his sons, John, William, Samuel, and Nathaniel, loaded his ship with trade goods that local Indians favored. The cargo contained axes, knives, garden tools, and hand tools. In addition, metal pots, woven fabrics, and wampum, the traditional shells used as a form of gift giving among Native tribes. Gallup’s hope was to trade with area tribes in the hopes of acquiring fur, hemp, and corn. While sailing with his crew, he noticed a friend’s ship anchored off Block Island. The vessel appeared to deserted, so he sailed closer to investigate. The ship belonged to his friend, John Oldham, and he noticed there were Native men sleeping on the deck. When he called to them, some of the left the boat in their canoes and headed to shore while the remaining men slipped the anchor and tried to sail away. Gallup and his sons trailed their friend’s vessel. His sons began shooting towards the ship. Before the men could escape, my grandfather rammed his ship into the fleeing vessel. Some tried to escape, and few prisoners were taken. Gallup discovered Oldham murdered in his cabin. Gallup and his sons retrieved his goods and endeavored to tow the shallop back to shore; still, the crew’s attempt to retrieve the ship failed, so they had to cut it loose.

Once the news spread about Oldham’s murder, unrest, fear, and a pursuit for revenge engulfed the colonists. It sparked an outrage that fanned flames and the colonists viewed the Native tribes as a threat to their families and their homes. This became the catalyst that sparked a war that became known as the Pequot War.

John Gallup was admitted to the First Church of Boston in January of 1633/4, and he became a Freeman on April 1, 1634. He died in Boston in the month of January in 1649/50. He lived for about 57 years, and what an exciting life this grandfather lived.

Mofford, Juliet Haines. “Devil Made Me Do It!” Google Books, Rowman & Littlefield, 2011, books.google.es/books